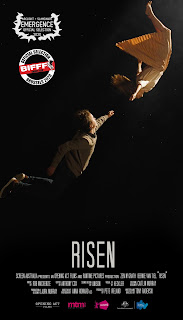 We hope this update finds you and your loved ones safe and healthy. It's not without irony that our dystopian short film has had its release disrupted by a global pandemic, so at least the universe has a sense of humour. In this very weird time, we thought you could all use some good news about something other than the end of the world.

Prior to the global malady, we have been actively pursuing international film festivals that are a good fit for the unique dystopian world of our new film 'Risen'. Thankfully, we are getting a positive response, with the wonderful news that 'Risen' was selected for the Oscar and BAFTA accredited Slamdance Film Festival's Los Angeles event 'Emergence'.

Shortly after the news of our Slamdance selection we also found out that 'Risen' was selected for the FIAPF-accredited 'Brussels International Fantastic Film Festival'.

'Risen' would have played in a festival programme featuring Pixar's latest film 'Onward'; Toronto FF, Stiges and FantastFest Austin's Netflix acquisition 'The Platform'; and the latest HBO series from the Wire's David Simon, 'The Plot Against America'. Esteemed company indeed.

We hoped these selections would give an opportunity for the 'Risen' TV series we are developing to move another step forward...but life often gets in the way of careful planning.

Now, the actual festivals themselves have been postponed/cancelled, due to obvious reasons, but that does not diminish the selectio

We live in hope that the positive response to 'Risen' continues later into the year, once all of this uncertainty has passed and film festivals can actually open their doors to a delighted public. Until that time, we at Opening Act Films wish you nothing but good health, and hopefully a measure of good cheer, until we can all shake hands again.

Posted by Opening Act Films at 2:17 AM